History of our Office Building 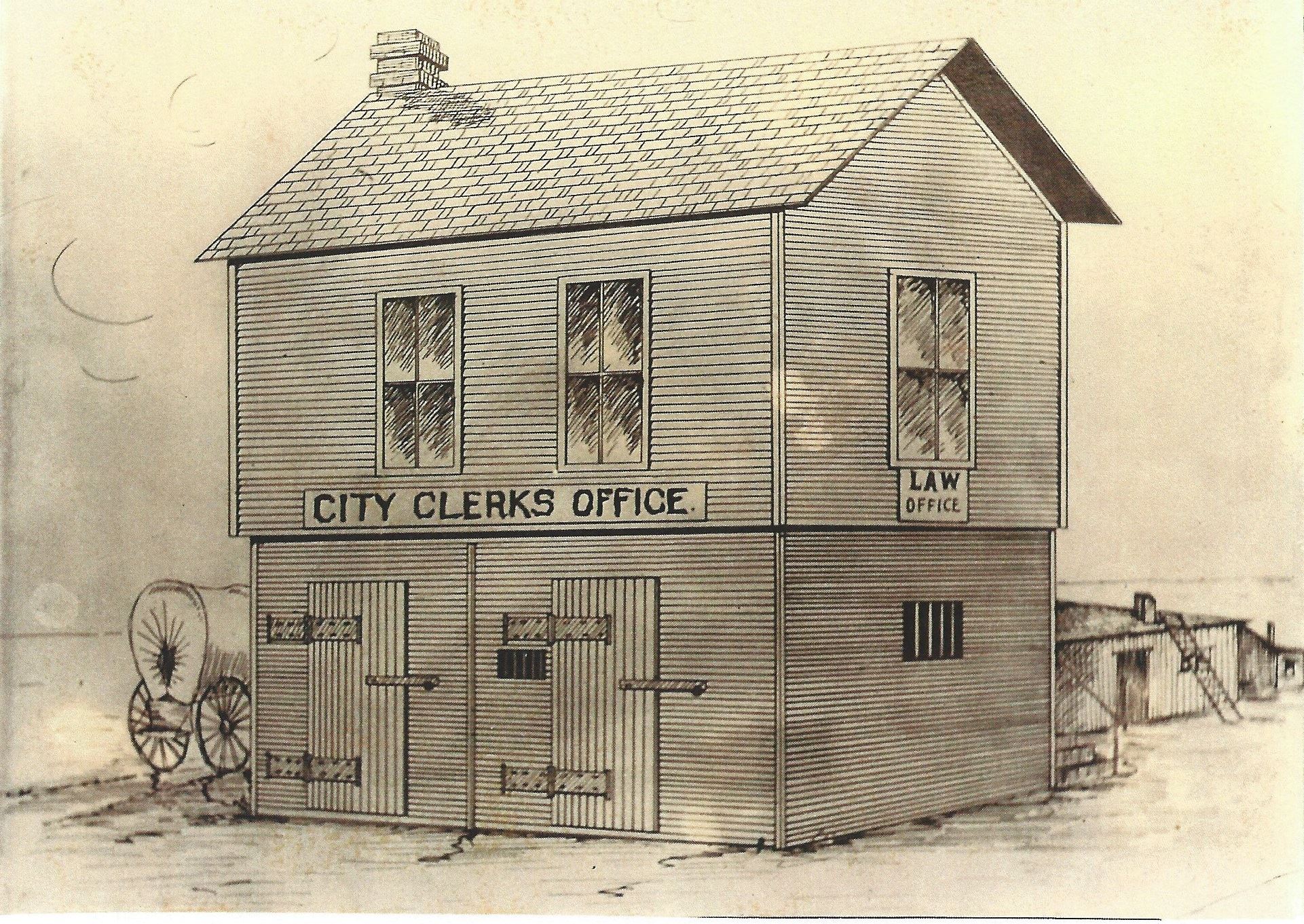 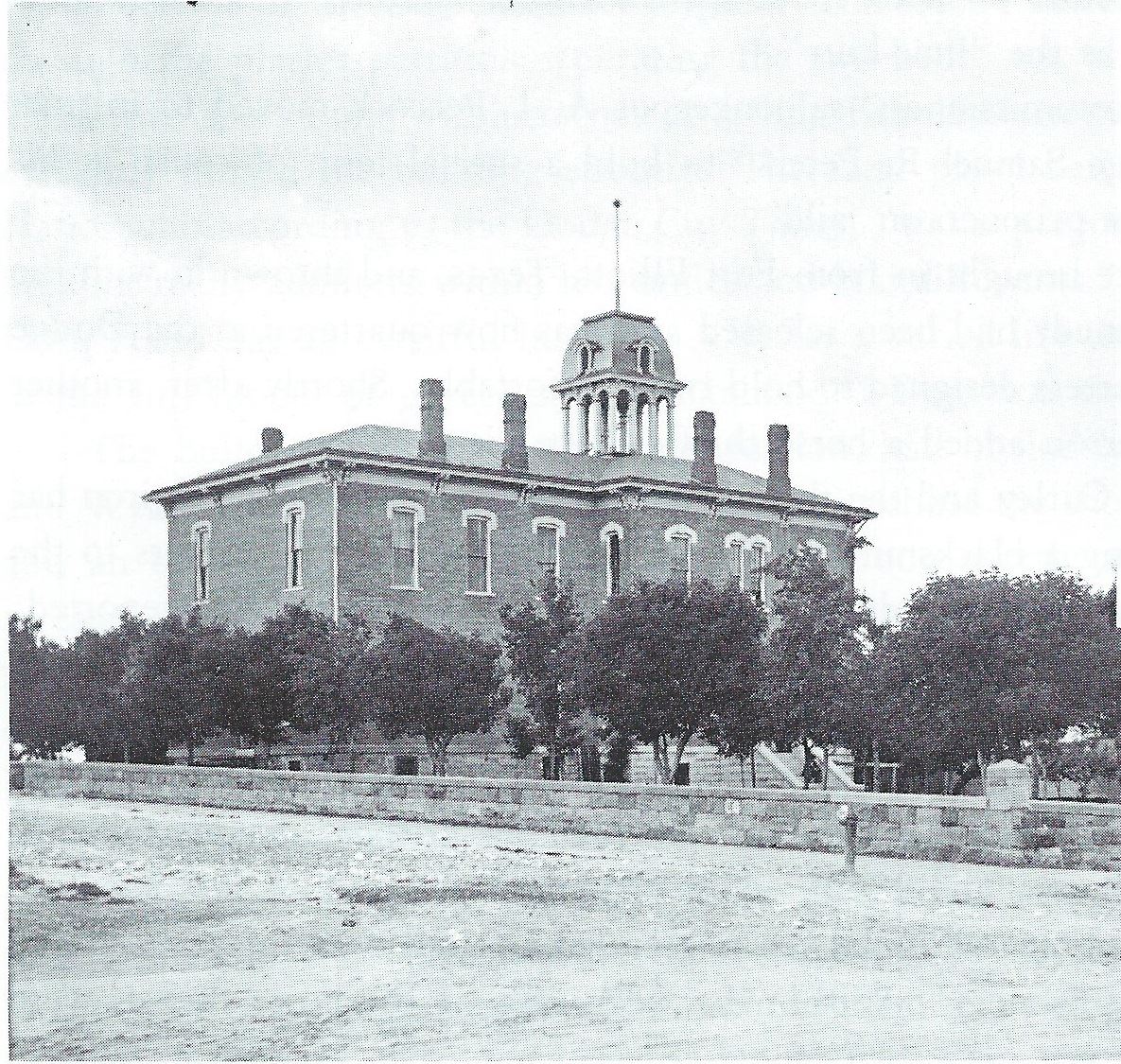 History of the Original Jail:

In 1872, Buffalo City was nothing more than a buffalo hunters' camp. There was no established law and the closet official law enforcement was in Hays City, 90 miles north. By late 1872, the renamed town, Dodge City, was incorporated, but still had no law to speak of. It has been said that Jack Bridges may have been an early lawman in Dodge City, but there are no records to confirm this story.

The first "jail" was reportedly a thick buffalo hide that drunks were placed under with the hide staked tight to the ground. The next jail was the "cooler", a term which originated in Dodge City. The "cooler" was an old well about 15ft deep into which drunks were lowered into until they cooled off. When they were able to climb out of the well, their debt to society was said to have been paid.

In 1875, the first actual jail was constructed on South Front Street. It was a two story wooden building; the ground floor housed the jail or calaboose and the top floor housed the city offices and police court. (Photo 1) It was used until 1876, when a new city hall building was built south of the railroad tracks. There was also a county courthouse erected in 1876, build of limestone and locally fired bricks. The Courthouse basement served as the jail and was named the "Lime Kiln" by some of those who has been lodged within its iron cages built against the basement limestone walls. (Photo 2) 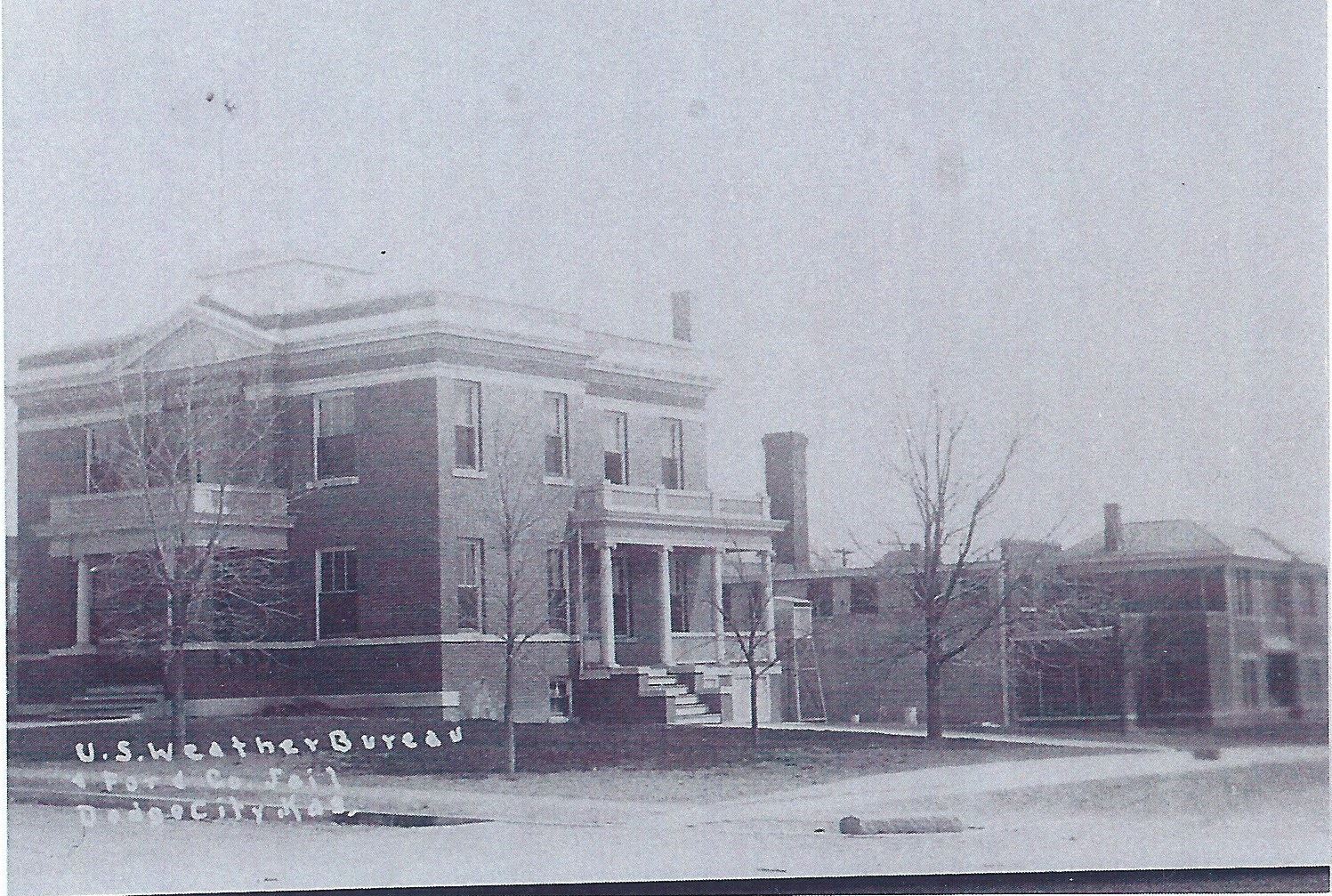 From 1931 to 2009, a red brick building on the corner of Ave. L & Military Avenue served as the home to the Ford County Sheriff's Office.
A later addition to the South end of the building was added in 1984 that served as the new housing for inmates.

This building was recently renovated and is now home to the Ford County Health Department. 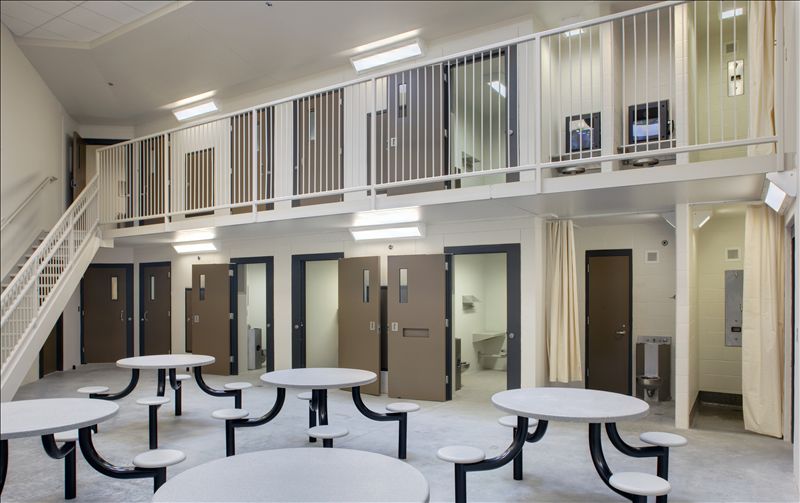 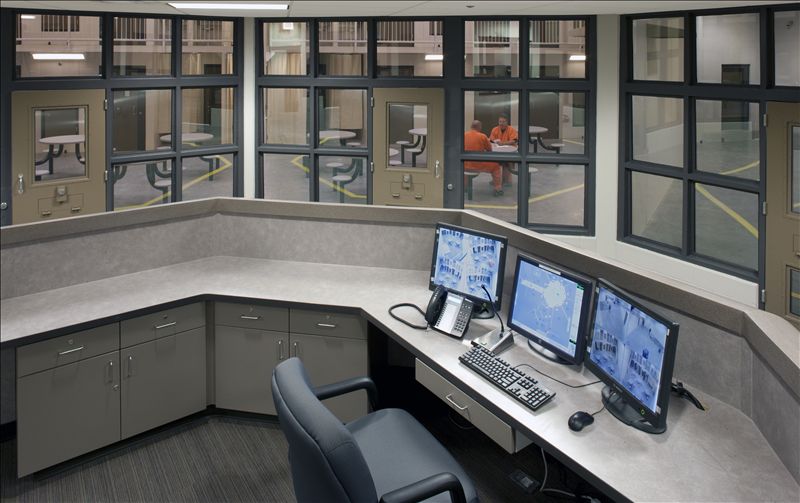 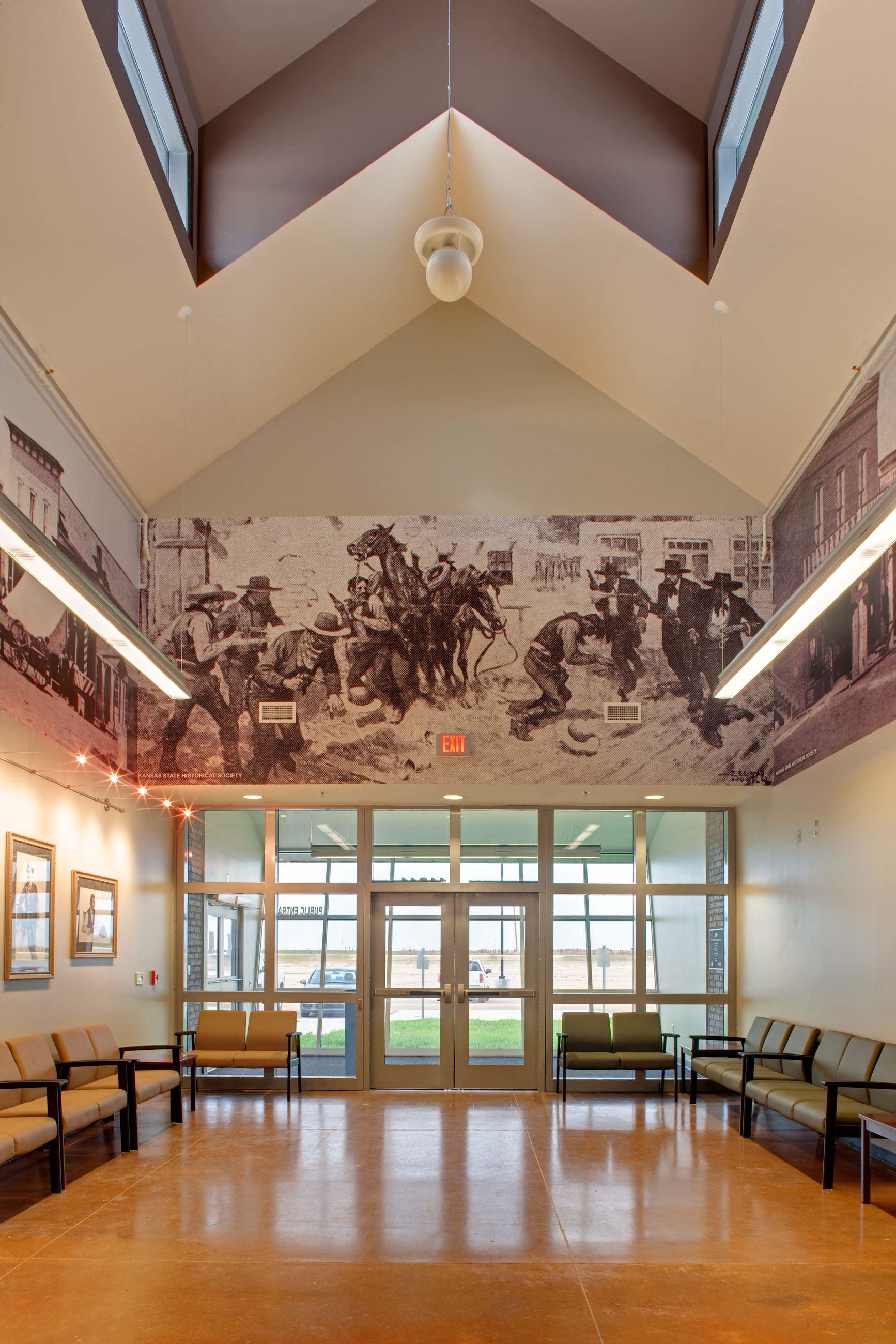 Names & places like Wyatt Earp, Dodge City, and the Long Branch Saloon conjure up visions of the Wild West, gun fights, and lawmen. The law enforcement history of our county is legendary, and with the opening of the new Ford County Sheriff's Office & Jail, that legend moves into the 21st Century!

The new Ford County Jail is a 256-bed, 80,000sq.ft. facility with the Sheriff's Office attached. The Jail is a blend of direct / indirect supervision styles with open, raised control posts in the general housing areas. They are designed, so the officer is protected while still having direct control and supervision of the housing and circulation areas. The jail is designed to allow for an expansion of up to 500-beds.

When building the jail, the team used precast modules to construct the cells. This method can be an advantage on "green" site projects, because it reduces construction time by several months, and on a project like Ford County where they're paying to house inmates in other counties, the savings to the county are significant. By using this technique, the project was completed several months ahead of schedule.

Each housing pod has its own programming and recreation space, keeping inmate movement throughout the facility at a minimum. Video visitation also minimizes inmate movement, as they only leave their housing pods to go to court or medical. Maximum flexibility is achieved by providing individual cells, sized for double bunking capabilities and day rooms sized accordingly (per American Correctional Association standards).

The facility also incorporates state-of-the-art touch screen controls and security systems throughout. The design allows for each control center to be under the direct visual observation of at least two other control posts at all times, increasing the security of the facility without increasing staff.

While the bulk of the facility incorporates these latest features and technology, the Public Lobby capitalizes on the opportunity to recognize the history and essence of Dodge City and Western Kansas. As visitors enter into the two-story lobby, they are greeted by a silk screen wall covering, which features images of Dodge City during its "Wild West" days and portrait photography of some of the area's more notable figures including Wyatt Earp and Bat Masterson.

Construction on the new building commenced in July of 2008 & was officially completed in September of 2009.